The passer-by of God

The passer-by of God opens the holy flask that the old prostitute kept hidden under her rags.And after taking the first drink, he offers her the flask full of the golden liquor of the Gods.

With the first sip, she becomes young and beautiful once more, and all those who shunned her in horror return to her full of love and respect. While those who maintained her in her vices and who exploited her shamelessly, fall to the ground under the weight of their iniquities that rebound on them.

With the second swig, the whole body of her beauty shines with the sweet light of God and her rags lie consumed at her feet. A divine perfume is exhaled from all her splendor and reaches her rediscovered children who inhale the good odor of life.

With the third drink, she sings with the angels the praises of her creator and, veiled by her golden locks, she dances the step of free and holy life with the virgins. Her children enter the dance and join in with their songs of joy under the loving gaze of the Father, who rejoices in his rediscovered and saved family.

The sage begins his work, but let nature accomplish it in his place, thus, he works while resting, and everything works out for him effortlessly, for he obstruct nothing.

‘Knowledge of the holy work is the obtainment of grace, it is the possession of love, it is the entry into glory and into the kingdom of God. ‘

‘ Way to the Sabbath of rest’ 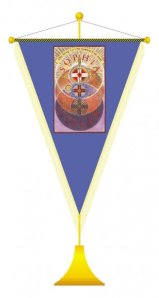 Regeneration is absolutely necessary to Salvation, John iii. 3.   Hence it greatly concerns us, to know its Nature and Operation, how it is to be considered, either in it’s Initiation, Progress, or Consummation.   As it is taken for the Beginning of the Work, it implies the first Change of the Soul, when in general the Frame of the Will is sway’d God and Heaven-ward.   In it’s Progress, ‘tis the growth and motion of the Soul, from the Image of the Earthly towards the Image of the Heavenly.   In it’s End, it is the bringing forth of the perfect and complete Image of God in our Humanity, 1Cor. xv. 49.    When we attain this, we are complete in Christ, wholly New-born,2Cor. v. 17. and made fit to see and enjoy that eternal Kingdom, which has been prepared for us from the beginning of the World.

2. Regeneration then in it’s full Latitude, comprehends all three States, and may be thus defined: It is that transforming quickening Work of God’s Spirit, which begins, carries on, and completes God’s Image in us.   And so it is taken by Christ, Matth. xix.18, where he promiseth twelve Thrones to his twelve Disciples as Rewards for their Faithfulness in following him,  an te palingenesia, in theRegeneration;   where it is expressed by an emphatical Note, insinuating the Fulness and Completeness of it, as there meant.

2.Renewal of the Spiritual Body…

This exciting excerpt from Chapter VI:

3. But through the renewal of the Spiritual Body, with it’s (r) five Faculties, or Powers; (answering to the five Senses of the external Body) the Objects and Pleasure of the Outward begin to be forgot, and to displease, instead of alluring and affecting the Heart. For by the Exercise of the Internal Senses, we see Spiritual Objects, as the Internal Light World, Visions of Angels, and Visions of Representation. In this state we likewise hear the Songs, Voices and Harmony of Angels, with the Harpers upon Mount Sion, who there continually praise the Lord; we smell the Perfumes of Christ’s Garments, and are often entertained with Paradisiacal Odours; we touch and feel the powerful tincture of Christ’s Body, which many times strongly affects the Heart with powerful delight: We also oft taste the heavenly Manna, and those Dews of Paradise which are sweeter than Honey, to that Part which receives them. (r) Heb. v. 14.

4. I could here more largely particularize the several Objects, Delights, and Enjoyments of the inward spiritual Senses; but because there may be great (s) Variety, according to the different Gifts and Capacities of several Persons; and in regard some (for ought I know) may pass far in the Progress of the New-Birth, without a particular knowledge of those Enjoyments; I shall not instance in many particulars, I could; nor set down my own (with some others) peculiar, and various Experiences.(s) 1Cor. xii. 5.

5. Yet in general, I cannot but affirm, that the unlocking the Senses of the inward Man, is a great Priviledge: And that the Soul by it attains many great Supports and Refreshments to uphold it, and give it encouragement to hold out to the End. For truly, this Communion it lives in now, with the (t) Angels of God, and other divine Objects, continually minds it of Heaven and Paradise; and exceedingly draws the Heart from all that is in the World, where Death and Corruption is writ upon every thing; and the Dragon and Beasts bring forth their various Wonders: But in this state the Soul blesseth God for that Constancy he afforded under the Cross: And for that Death it hath undergone, in Resignation to this Will, which hath proved a Passage into this Life; in which the Soul beholds the opening of a (u) new World, with it’s glorious Hosts: And begins to feel the Sweetness of the Angelical Life, and to see what we fell from, by descending into the Spirit of Mortality, and the sensitive Nature.(t) Heb. xii. 22. (u) 2Kings vi. 17.

3.The fundamentals of Boehmian Theosophy, in a nutshell
End of Chapter 4:

4. Now the motion of the Soul through the Gate of Death towards Life Eternal, is the motion of a Spirit, which is to be looked upon as ascending or descending, as it comes nearer or removes further from God the Center, as Bodies ascend or descend in relation to their Center, by their tending toward or fromward the Visible Heavens. Upward therefore to a Soul, is Inward; Outward is Downward. The Center is the Highest, the Circumference the lowest. God is in the Center being the most Inward; Matter in the Circumference, being most Outward; (g) yet God is in the Outward, as his footstool, but in the most Inward, as his Throne; filling both, though in both, not manifest alike. In the Inmost, he shows himself wholly in the Love; in the Outmost, in Love and Wrath, Life and Death, Generation and Corruption: But in the Inward dark World, altogether in Death, Darkness, and Wrath; as in the Inmost, all in Light and Life. (g) Isaiah lxvi. 1.

5. Therefore our Progress is from the Outward, through the Inward to the Inmost. The Outward is the place of Good and Evil, and as to its corrupt State, the Kingdom of the Beast. The Inward is two-fold, either the Dark or Light World. The Dark, is the Kingdom of the Dragon, the Center of Evil and Wrath; The Light World is the Paradisiacal Sphere, or that Garden of Eden, which is also situate in its Mesopotamia, or betwixt the two great rivers of Wrath and Love. The first of which is called (h) The Lake of Fire, burning with Brimstone; the last, Rev. 22 A pure River of Water of Life, clear as Chrystal, which proceeds out of the Throne of God, and of the Lamb. The Inmost, is the eternal Sanctuary, or true eternal Tabernacle of God, and that spiritual Land of Peace, where Abraham, Isaac and Jacob, and all the glorified, departed Saints live and inhabit. (h) Rev. xix. 20. 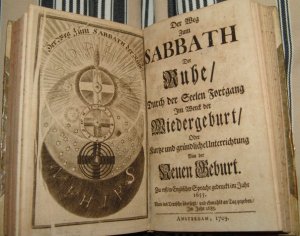