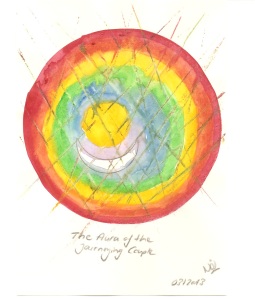 The rarified forces . – The Aura. – To develop one’s own beautiful auric entourage (personal environment). – Reality of thought and of the invisible forces. – The law of affinity: We attract what is alike (like attracts like). – Thought must direct action and action must reflect thought.

There is a great benefit for oneself and for the others to own the most possible beautiful qualities (virtues). There exists surrounding every people an ‘entourage’ (a personal atmosphere, environment) of forces. We call these forces invisible currents, much alike for example to heat, sound, steam, to the electric currents of a battery, etc…

Therefore, we are all submerged in an ocean of these invisible forces that bathes us and surround us as much as the air we breathe.

These forces are emanated and formed by human beings, and they are what we call the auras.

We call aura the entourage of forces more or less invisible that surround a being. Everybody has his/her aura, more or less beautiful, more or less pure, more or less big, depending if we are of a lesser intelligent level of  being or of a more elevated level.

This ‘entourage’ can be ‘seen’ by some sensitive people that have the gift to see things that most of the people cannot generally see and who are called ‘seer’.

The fairy tales are not as imaginary that we may wrongly think. Most of them are originating from a very distant past and are full of great truths about this invisible life that we just mentioned that is a huge part of reality.

Some deny the existence of the invisible world: It’s because they haven’t seriously seeked by themselves to experiment it. In fact, thought exists not as an abstract thing and unreal, but on the contrary as a living reality, like a visible force for the seers, that can see both the shapes and the colors. Outside of seership, we can experiment the existence of thought in a quantity of circumstances where thoughts are received through space, going from one person to another that achieve to communicate without speech or writing: This is called telepathy.

We have understood this great truth of the existence of thought, we even more have the duty to watch over our deeds, our speeches, our thoughts and all feelings. Because, when one acts wrongly or one thinks in a chaotic way, we form bad currents of harmful forces towards oneself as much as for others. These forces are so much harmful, that when we are emanating them, we attract others that are around ourselves, all equally bad, coming from other people. We are here hinting at a very deep law: We attract towards us similar things to those we emit.

The more we observe, we see for one self how much are true these relations between things and beings, between what we have inside of us and what we attract from the outside.

Because there is a kind of justice, that the ancient Greeks called the law of Nemesis, and each time that we trespass the strait line of balance, we attract around us, for now or for later, in the visible or in the invisible, a shock in return.

‘Everything is Weighted, Measured, Numbered’ is a saying of eternal truth.

When we disturb the order, the order re-establishes itself, one day, and at the cost of those who have troubled it.

Therefore, it is not only our thoughts that would be enough to shape what is to come (the future), it is also our actions (deeds) and they need to correspond entirely to them (our thoughts). There is a beautiful sentence in one Cosmic Book: ‘A thought without action is like a king without a kingdom.’ In fact, thought is genuinely the king, it is it that needs to lead our speech and our deeds, but sadly too many people have the annoying habit of talking and acting without thinking!

But, if, in order, thought is directing action, this action must materialize it, reflect it in the best way possible, the most often possible, and like a beautiful rose bush gives abundant roses, like a fruit tree multiply its fruits, a being that has thought a lot about  good realize its benefits, as often as possible.

The visible actions must be like the image of what is happening around us, in these relatively invisible entourages that we have spoken about and that are the more subtle states of matter.

Our deeds must be examples of good deeds, and the same, our rarified entourage must be luminous, balanced, pure and benevolent.

Then, not only our everyday life will be useful and precious, but also our thought, that well steered, may become like a great force and become like a wonderful source that will flow afar, that in our world we call the invisible, and form better tomorrows and labor for the good, according to this beautiful saying of Confucius: