Parable of the Chameleon / Bukalemunun Hikayesi 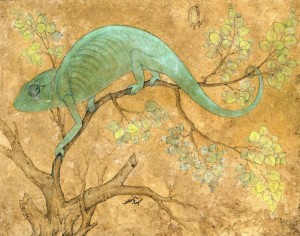 15 May 1992. This was the date I wrote down this beautiful “Parable of the Chameleon” from the Gospel of Sri Ramakrishna into my diary, a collection of poems, quotes and book excerpts – all kind of words, phrases that were touching me in my age of 17, living in Germany. Although 21 years passed, this inter-religious parable is still speaking to my heart.

Sri Ramakrishna: “Listen to a story. Once a man entered a wood and saw a small animal on a tree. He came back and told another man that he had seen a creature of a beautiful red color on a certain tree. The second man replied: ‘When I went into the wood, I also saw that animal. But why do you call it red? It is green.’ Another man who was present contradicted them both and insisted that it was yellow.

Presently others arrived and contended that it was grey, violet, blue, and so forth and so on. At last they started quarreling among themselves. To settle the dispute they all went to the tree. They saw a man sitting under it. On being asked, he replied: ‘Yes, I live under this tree and I know the animal very well. All your descriptions are true.

Sometimes it appears red, sometimes yellow, and at other times blue, violet, grey, and so forth. It is a chameleon. And sometimes it has no color at all. Now it has a color, and now it has none.’ “In like manner, one who constantly thinks of God can know His real nature; he alone knows that God reveals Himself to seekers in various forms and aspects.

God has attributes; then again He has none. Only the man who lives under the tree knows that the chameleon can appear in various colors, and he knows, further, that the animal at times has no color at all. It is the others who suffer from the agony of futile argument.

“Kabir used to say, ‘The formless Absolute is my Father, and God with form is my Mother.’ “God reveals Himself in the form which His devotee loves most. His love for the devotee knows no bounds. It is written in the Purana that God assumed the form of Rama for His heroic devotee, Hanuman. 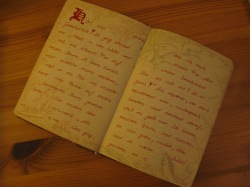 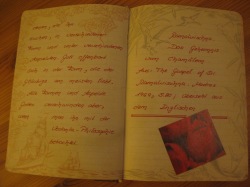 This entry was posted in Ruhun Rehberi / Soul Guidance. Bookmark the permalink.

2 Responses to Parable of the Chameleon / Bukalemunun Hikayesi