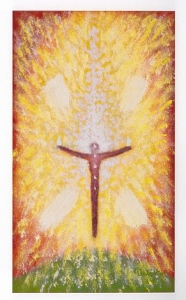 Dear Friends here is now the continuation of this great text, from Gustav Meyrink’s ‘Green Face’, in which we recognize so much of what we share @The Scola Hermetica. Enjoy  also its new and fresh Turkish garments ! Nalan and Nico

“This day you have been accepted into our community; from now on you are a new link in the chain that stretches from eternity to eternity. With that my task is finished, it will be taken over by another, whom you cannot see as long as your eyes still belong to this earth.

He is infinitely far away from you and yet close by; he is not separated from you by space, and yet is farther away than the farthest comers of the universe; you are surrounded by him, just as someone swimming in the ocean is surrounded by water, and yet you are not aware of him, just as the swimmer will not taste the salt if the nerves on his tongue are dead.

Our symbol is the phoenix, the symbol of renewal, the mythical Egyptian eagle with red and gold feathers which makes a pyre of its nest of myrrh and rises anew from its ashes.

I told you that the body is our starting point; once you know that, you are ready to begin your journey. Now I will teach you the first steps.

Here the first enemy is already lying in wait for you.

If you tear yourself away from your body, in order to fly through space, you are following the path of the witch, who merely draws a ghostly body out of the coarse, earthly one and rides on it as on a broomstick to the witches’ sabbath.

With a sound instinct, mankind has erected a bulwark against this danger in the smile with which it greets any suggestion that such black arts should be taken seriously. You no longer need the protection of doubt, you already possess a better sword in what I have given you.

The witches believe they are attending the devil’s sabbath, when in reality their bodies are lying on their beds, rigid and unconscious. They merely exchange earthly for spiritual perception, they lose the better part to win the worse; it is impoverishment instead of an enrichment.

That alone should tell you that it is not the path of awakening. Men commonly believe they are their bodies, and to come to understand that this is not the case, you must learn what weapons the body uses to maintain its mastery over you. At the moment, of course, you are so deep in its power that you are plunged into darkness whenever it closes its eyes, and your life would be snuffed out if its heart should stop beating. You believe you make it move, but that is an illusion: it moves itself, using your will as a lever. You believe you create ideas; no, it sends them to you, so that you think they come from yourself and do everything it wants.

Sit upright and resolve not to move at all, to remain as motionless as a statue, and you will see how at once it will attack you furiously to try and force you to submit to it. It will shower you with missiles until you allow it to move again. And its fury and the haste, with which it shoots dart after dart at you, will tell you, if you pause to think, how fearful for its mastery it must be and how great your power must be if it is so afraid of you.

But there is another ruse in all this: it wants you to believe that it is here, in physical control, that the decisive battle for the scepter is fought. But that is only a skirmish, which it will let you win, if necessary, only to have you even more firmly under its yoke. Those who win such minor affrays become the most wretched slaves; they imagine they are victorious and on their brows they bear the stigma: ‘a man of character’.

Taming your body is not the goal you are seeking. If you forbid it to move, then you only do that in order to acquaint yourself with the forces it has at its command. There are hosts of them, they are so numerous as to be almost unconquerable. If you insist on continuing with the apparently simple test of sitting still, it will send them out against you, one after the other first of all the brute force of the muscles, which want to twitch and tremble; then the seething of the blood which covers your face in sweat; the thumping of the heart; the shivering of the skin until your hair stands on end; the unexpected jerk of the body, as if gravity had suddenly changed its axis – all of this you can overcome, apparently through your will; but it is not your will alone, there is already a higher wakefulness that stands invisible behind it.

This victory, too, is of no value. Even if you could control your breathing and your heart-beat, that would only make you a fakir, and what does that mean in our language but `a poor man’.

The next warriors your body will send out against you will be thoughts, whirring round you like a swarm of flies. Against them, the sword of will-power is of no use. The more you strike out at them, the more furiously will they buzz around your head; even if you do manage to drive them off for a second, you will just fall asleep and will have been defeated just the same.

It is impossible to command them to be still; there is but one way of escaping from them: by fleeing to a higher wakefulness. What you must do to achieve that, you must find out for yourself. All I can tell you is that you must be firm and decisive and at the same time feel your way tentatively with your heart.

Any advice anyone else might give you for this agonizing struggle is as poison. You are faced with a precipice and no-one can help you overcome it but yourself.

The important thing is not to rid yourself of these thoughts for good, the purpose of your battle with them is to enter the state of higher wakefulness. Once you have achieved that, the realm of ghosts, of which I have already spoken to you, will be near. You will see apparitions, both terrible and radiant, that will try to make you believe they are beings from another world. They are merely thoughts in visible form, over which you do not yet have power.

The more sublime they appear, the more lethal they are, remember that!

Many a mistaken belief is founded on such apparitions, and has dragged mankind down into darkness. In spite of that, each one of these specters conceals a deeper meaning. They are not mere pictures; irrespective of whether you can understand their symbolic language or not, they are signs of each stage of your spiritual development.

The transformation of your fellow human beings into ghosts which, as I told you, will follow this stage, contains, like everything else in the spiritual realm, both a poison and healing power. If you do not get beyond the point where you see people solely as ghosts, then you will drink only the poison and will become like those, of whom it is said, `though they speak with the tongues of men and of angels and have not love, they are become as sounding brass’. If, however, you find the ‘deeper meaning’ concealed within each of these spectral people, then you will be able to see with your spiritual eye not only their living core, but also your own. Then will everything that was taken from you be returned, as to Job, a thousand fold; then you will be – back where you started, as the foolish say in their mockery; they do not know that it is one thing to stay at home, and quite another to return home after one has been abroad for a great length of time.

No one can say whether, after such a long spiritual journey, you will be granted miraculous powers, such as the prophets of antiquity possessed, or whether you will be allowed to enter into eternal peace.

Such powers are the free gift of those who guard the keys to these mysteries. If they become yours to use, then it is only for the sake of humanity, which stands in need of such signs.

Our path leads finally to the journey; if you reach that stage, then you are worthy to receive that gift. Will it be granted you? I do not know. But however that might be, you will have become a phoenix; it is in your power to enforce that.”

This entry was posted in Spiritüel Ustalar / Spiritual Masters and tagged Anka Kuşu, Gustav Meyrink, The Green Man, The Phoenix. Bookmark the permalink.