Dear friends, we present you ‘Pantheon‘, a poem by Louis Ménard that is very emblematic of his style and thought. It is classical in style but also has an economy in term of usage of images, also proper to the very best Symbolism. Its structure reveals a depth that if properly  invoked, ‘it would find a way to reveal the secret of its mysterious language to those who would interrogate it fervently (Bold quotation from ‘The Veil of Isis’).’  Enjoy !

The ideal temple where our prayers go

Encompass all the gods the world had known.

Invoked from all the sanctuaries,

Ancient and new, they all came.

The gods that the primitive night engendered

Before the first day of creation,

Those that, in these old age days,

The Earth worships, awaiting its redemption.

Those who, enshrouded in shadow and silence,

Contemplate, through the endless eternity,

The world, that always ends and restarts

In the illusion of the divine dream.

And the gods of order and harmony

Who, in the depth of the multiple universe,

Trickle the bubbling streams of life,

And rule the ballet of the golden spheres.

And the warrior gods, the living virtues

Who walk in their strength and their male beauty,

Guiding the proud people and the mighty races

Towards the holy struggles for liberty.

All have gathered: For them the incense still ascends,

The voice of the hymns rises, like in the days of faith;

Around the altar, a great crowd adores

The last mystery and the great law.

Because, it is here that a god offers himself in sacrifice:

There is need for the  bloody beak of the eternal vulture

Or the infamous  gallows of the eternal torment,

To have the human soul rise to heaven.

All the great heroes, the saints in prayer,

The pyre on the Oeta, the cross on the Calvary,

And heaven, at the price of blood and tears.

But in the depth of the temple lies a chapel,

Discreet and collected, where from the heavens ajar,

The divine dove shades with her wing

A pure lily, bloomed under the green palm trees.

Since your chaste womb conceived the last god,

May you rule besides your son, shining and starry,

The feet standing on the crescent moon, in the deep blue sky. 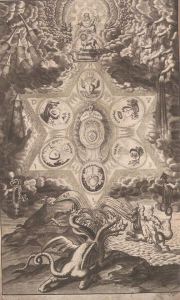 The Veil of Isis