There are three mirrors of God*, in which He has embedded His own image; and these three mirrors, or images confess, demonstrate the truth of His being, not only in the vague manner the philosophers would understand it, but also for those who could see, in every detail He has given of Himself, in naming Himself with different names in the Revelation and in the expositions of the mysteries that are contained in it.

These three mirrors are the true and naïve portraits of everything God eternally infinite in Him self, saw fit to show of His nature outside, through the Word, which was emanated in the simple and eternal instant, and in which are embedded the ideas, or eternal prototypes, the originals, the primeval models, from and after which the universe and all the worlds were created.

These three mirrors are, the UNIVERSE, HUMANITY* and REVELATION. The last one would have not been needed if humanity, having stayed loyal, would still be in possession of the Divine light- that would have shown, in itself and in nature, the truth of all these adorable mysteries and all that encompass the positive revelation, which was made necessary as a supplement to the internal light that God has taken out, since the fall and the blinding it has produced, from the first fallen Humanity*. 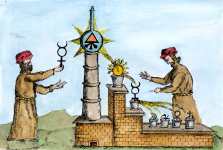 Red King symbol from the ‘Speculum Veritatis’. Colored by the great Adam Mc Lean for his trail blazing ‘The Alchemy Website’.

Notes: *1. Dutoit writes ‘la Divinité’, the Divinity; we chose to write God, as with Divinity we need to use ‘it’, ‘its’, so we preferred our choice in English. *2 & *3. Dutoit write ‘l’Homme’, Man; we preferred the more encompassing ‘Humanity’.

This entry was posted in Spiritüel Ustalar / Spiritual Masters and tagged Jean-Philippe Dutoit-Mambrini, The Three mirrors of God. Bookmark the permalink.