A wee-bit about the so called ‘skeleton mosaic’ recently discovered in Antakya, south of Turkey. The ‘scholars’ missed the point and gave very surface explanations.The articles are below for you to look and compare. Here are some other picture and text sources to suggest that there is probably more to their claim. We live in an epoch were so much knowledge is lost in many ways.  We have a duty to remember and keep alive the wisdom transmitted by our ancestors ! Blessings, Nalan and Nico.

‘The first picture is from a mural fresco in Pompei, and now in display at the Naples museum; We see the Apprentice, the arm forming a set-square and the right arm placed over the head; the centaur, wearing the Master’s sash; the Pythia putting two fingers of her right arm upon her lips. 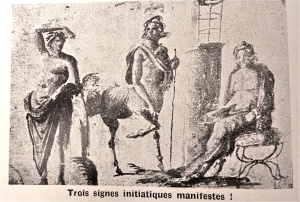 The second picture represent an archaic ivory Apollo who also puts his right arm, not on his heart, but on his head. This is for us to remember the priority of Reason over the emotions, because Wisdom (Athena), mother of every righteous thought, was born from the very brain of Zeus, her eternal father.’ (From Jean Mallinger’s ‘Des Initiations antiques aux initiation modernes’. Planquart, 1980.)

The third picture is showing the birth of Athena, as in Maier’s ‘Atalanta Fugiens’, emblem XXIII.

The fourth represent PAN in his Samothracian cabiric role also doing the sign. From a Sicilian vase in Ouvaroff’s ‘Essay on the Eleusinian Mysteries’. London, 1817. 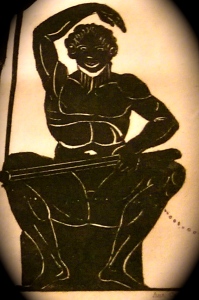 The other pictures are from the Antakya recent find. For us this looks probably like a ‘drawing board’ of a kind of Pythagorean or similar ‘ancient mysteries’ loge. Every detail points towards this: The outside ropes forming ‘love lakes’ (infinity sign); the rectangle frame of the mosaic, also called ‘long square’; and finally the sentences are more like ‘theorems’ for the initiates contemplation, working on virtues and archetypal ideas in the platonistic sense, to ‘elaborate a deeper meaning from the crust of things’. 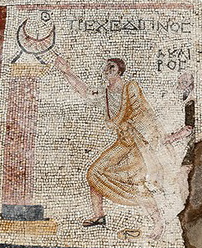 ΤΡΕΧΕΔΕΙΠΝΟΣ (TRECHEDEIPNOS) meaning ‘The one who runs to a banquet even though he has work to do’. Reminds us of a Louis Cattiaux quote in the ‘Message Rediscovered’:

‘It is not the host that shall be deprived, but in fact the guests that voluntary abstain.
– As regards he who is charged with announcing the feast of the holy union, he shall benefit with his friends from the absentees’ part.

This entry was posted in Semboller / Symbols and tagged Ancient Symbolism, Antakya. Bookmark the permalink.