‘The 3 Sacred Currents’. Symbol of the Biogenic Society founded in 1928 by Romain Roland and Dr. Edmond Bordeaux-Szekely.

When the sun will be high in the sky, you will seek the sacred current of sound, in the heat of noon, everything stands still, all creatures rest in the shadow and the angels of the earthly mother become silent. It is then that you will open your ears to the sacred current of sound, as it could only be heard in silence. Think of the streams that spring in the desert after a violent storm and of the roaring of the waters. It is the voice of God, but you didn’t know. Because, it is written: At the beginning was the sound and the sound was with God. In truth I say to you, when we are born, we enter the world with the sound of God present to our ears, together with the song of the vast choir of heaven and the holy melody of the stars in their perennial course. It is the sacred current of the sound that crosses the celestial dome and the infinite kingdom of the heavenly father. It reaches us always, but we don’t hear it anymore. Therefore, at noon, in the silence, bend your ear and submerge yourself in the sound and allow the rhythm of God’s music beat in you until you become one with the sacred current of the sound. The sound created the world, erected the mountains and fixed the stars unto their throne of glory, way up in the sky. You will bathe in the current of the sound and the music of its waters will wrap you up. Its roaring will echo in all your body and its might will make you tremble. You will then inspire deeply the angel of the air and become the sound itself. Carried by this sacred current, you will reach the infinite kingdom of the heavenly father, where beats the rhythm of the world.

And finally, when darkness will gently close the eyes of the angels of the earthly mother, you will sleep also so that your spirit rejoins the unknown angels of the heavenly father. In the moment that precedes sleep, you will think of the bright stars, glorious, sparkling and far away. Because your thoughts at that exact moment are the bow of the archer that sends his agile arrow where he desires. At that moment, direct your thoughts towards the stars, because they are light. Penetrate in the sacred current of light, so that the chains of death lose forever their power on you. And unbound from the ties of the earth, ascend the sacred current of light, among the stars, until the infinite kingdom of the heavenly father.

Deploy your wings of light and, in spirit, soar with the stars, towards the most remote regions of the heaven where unknown suns shine. Because, at the beginning of time the holy Law said: Let there be light, and the light became. And you will become one with it, as its sacred current spreads in all your body and its might will make you tremble. You will then pronounce the word light while inspiring deeply the angel of the air and you will become one with the light itself; as it will carry you towards the infinite kingdom of the heavenly father, where he is blended in the cosmic sea of the light, cradle of all the creation. You will sleep in the arms of the heavenly father only when you have become one with the sacred current of light.

It is not possible to tell you more. The sacred currents will lead you where there is no words any more, in a place where even the holy manuscripts cannot record the mysteries.’ 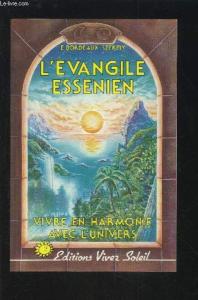 Translated from the French

from: ‘The Gospel of the Essenes’,

This entry was posted in Spiritüel Ustalar / Spiritual Masters and tagged About the 3 Sacred Currents, Dr. Edmond Bordeaux-Szekely. Bookmark the permalink.