The following text is a description and explanation of the above engraving.

The Greek inscription reads: ‘To the Manes Gods (Spirits of the ancestors), Antonia Valeria erected this monument to her late husband Aurelius Epaphroditus.’

‘We can recognize Ceres as the sitting woman, to her attitude, her hair style, to the snake at her feet, to the ear that the two women in front of her are holding. If she is represented as a mature woman, it is because she took this aspect. Her hair are up and hold on her forefront by a pointy headband (like a diadem), that Ovid describes in these verses :’ Mitraque capillos prefferat’ ; this is the casual head style for the Goddesses and the Empresses.

She is sitting on a stone, the one called ‘the sad stone’. The snake at her feet is one of her main symbols. The curved staff that she holds in her left hand was for the Greeks the scepter of the Gods; it is also found in Egypt.

Triptolemus, is after Ceres, the most apparent figure. Only wearing a simple toga, in the manner of the heroic times, he makes his entrance with the chariot Ceres gave him. To his young and vigorous look, we can recognize the Goddess’s infant and the ear of wheat he holds in a fold of his toga clearly marks his mission.

To the side of the chariot is a laurel, indicating that this scene is happening in the ancient region where the laurel grows abundantly.

Between the Hero and the Goddess, we can recognize Celeus king of Eleusis and Triptolomus’s father, Metanira his mother and a sister. Metanira is talking to Ceres and tries to soften her by calling her Mother and reminding her the memory of her daughter (Prosperina).

The character on Ceres’s left that carelessly lean his hand on her left shoulder and touches with the other a wine stock full of grapes, is Bacchus. We can recognize his to his plumpness, to his youth, to his crimson color, his long hair and the vine leaves and branches crown.

Behind him is a Goddess standing on a chariot of which another person hold the horse that has already knock down a bacchant. This chariot seems to be the one of Dawn stopped by Night, so that she doesn’t interfere with the ceremony. We can recognize Night by her Diana dress and her veil.

Beyond Triptolomus’s chariot, we can see two women that each hold torches in a different manner. They are initiates of Ceres’s Mysteries, seen celebrating the day called the ‘festival of the torches.’

The man between them is Eumolpe, one of the four person Ceres has chosen to celebrate her Mysteries of which he was the first Hierophant and this service continued in his family for twelve hundred years, even though this function demands that the chosen one remains a virgin for life.

The child that is holding two ears of wheat shows that children were also initiated, according to Mr.De Boze, symbolizing that population is thriving from agriculture.

Finally, the figure behind is an woman from Athens, dressed alike the other woman and implies by the sickle she holds that they are grateful to Ceres for the gift of such an instrument.

As for the people named in the inscription, Mr. De Boze suspects that Antonia Valeria was a Priestess of Ceres, or at least an initiate to her Mysteries and that her husband was probably the famous Epaphroditus, a former slave freed in Egypt by the perfect Modestus at the time of Neron. He became the mentor of Modestus’s son and built a forty thousand books library, huge for the epoch were manuscripts where only available; most probably assembled from smaller libraries of notorious Romans who were hit by misfortune or tyranny. Epaphroditus is known also to have himself written books.’

Volume IV-History of the Calendar. Paris_1776. 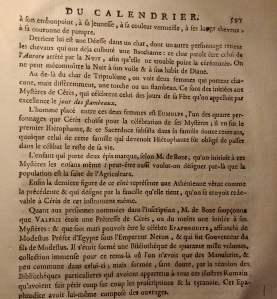