An Omphalos (ὀμφαλός) is a religious stone artifact, or baetylus. In Greek, the word Omphalos means “navel”. Alike the ‘Ben Ben Stone’, embedded at the heart of the Egyptian sanctuary of Heliopolis, the Omphalos stone has also a mythological background:

In order to save Zeus from being devoured by his father Chronos, Rhea his wife and Zeus’s mother wrapped a stone with swaddling clothes to pretend it was Zeus, saving his life by this trick. This very stone, was to play a crucial part later, when ‘Zeus (Jupiter) sent a couple of eagles from Delphi, as it is said, to the regions of sunrise and sunset; while he desires to investigate into the center of the earth, these eagles return simultaneously to Delphi, according to the legend. But they are two stones belonging together, which meet in the right way, the one from the East, the other from the West.’ (Epigram from figure XLVI (46) in Michael Maier’s ‘Atalanta Fugiens’). The eagles dropped the Omphalos stone over Delphi, on their arrival from their journey around the world, following the exact course of the Sun. 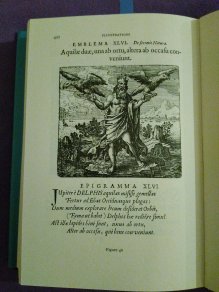 Another version of the story alludes at Zeus eager to find the geo-centric position of his “Grandmother Earth” (Gaia) sent two eagles flying from the eastern and western extremities. The path of the eagles crossed over Delphi, where the Omphalos, or navel of Gaia was found. The sanctuary stands at this exact position and is also the alleged place where Apollo was said to have slain Python, a “drako”, a serpent or a dragon who lived there and protected the navel of the Earth. This myth has been described as an allegory for the dispersal of the fogs and clouds of vapor which arise from ponds and marshes (Python) by the rays of the sun (the arrows of Apollo).

The Omphalos was located in the sanctuary near the tripod where the Phythia sat over an opening in the earth (the “chasm”) to deliver the Oracles. According to legend, when Apollo slew Python its body fell into this fissure and fumes arose from its decomposing body. Intoxicated by the vapors, the sibyl would fall into a trance, allowing Apollo to possess her spirit. In this state she prophesied. 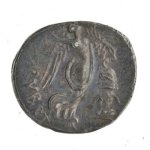 The ‘original’ Omphalos is said to have been destroyed in the 4th century CE. by Theodosius I and Arcadius. The existing stone in the museum at Delphi is a copy of a supposed original. Other very ancient ‘Omphalos’ stones are also to be found around the world; one version differs from another, but identical is the source-archetype.

From the archives and Library

of the Scola Hermetica,

This entry was posted in Semboller / Symbols and tagged Omphalos, Phythia, Sanctuary at Delphi. Bookmark the permalink.