‘In order to be complete in our survey of the Eleusinan Mysteries, we ought to seek their representation on some monuments: An Italian scholar, Mr Bartoli, found one related to these Mysteries and gave the description and explanation in a work named, ‘The Eleusinian Cave’, of which the ‘Journal des Savants’ gave a review in 1762. 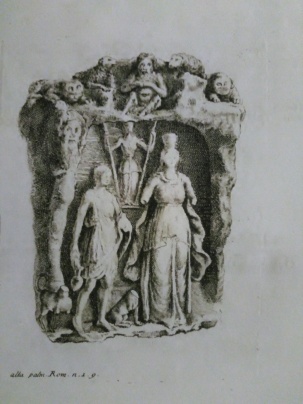 This monument is Greek and is a bas-relief that represents a cave, on top of it appears a old man with a long beard between to rams, each having by its side a lion. Below the lion on the right of the cave’s entrance, we see the face of another old man with an even longer beard. In the inside of the cave, on a light base, the figure of a woman, wearing a long dress falling down to her heels, and on it another piece of clothing, shorter, girded by a belt. She carries on each hand some kind of torch matching her size. On the grounds of the left of the cave, we discover another woman figure identically clothed, but with a wooden bushel on the head and a veil that seems to come down from it, becoming wider as it gets lower along the back until just below knee. To her right, a dog sits by and also a young boy is standing, whose head, feet and legs are bare. He holds on his right hand a small vase or amphora and with the other lifts a side of his tunic, seeming to have just arrived and was followed by another dog.

It was always believed that this monument was representing the cave of Trophonius, until when Mr. Bartoli understood that it was an allusion to the Eleusinian Mysteries. In these Mysteries, the initiate were made to go through several caves: Aeneas went through the cave of the Sybil, then the one that leads to the Underworld, and from there into the one where Cerberus was found.

The woman figure in the back is Prosperpina, represented in the moment where given back to her mother for six months, she is coming out of the underworld.

The goddess, wearing the wooden bushel on her head, is Ceres, with the symbols of the gifts she gave to the mortals.

The young man on her right is Triptolemus, to whom Ceres taught the art of sowing. The vase is an allusion of the useful purification rites in the Mysteries. It is perhaps the one that was called: Plemothoe.

The head of the old man with the long beard represents one of the masks being used in the Mysteries and this one may be related to Musaeus. (Son and disciple of Orpheus)

Finally, the old man above the cave is Orpheus, who, the first, brought civilization to humanity. He is idle and without his lyra, between the rams and the lions; the rams look at him, as imploring his help against the lions. It was wished to represent with this emblem, that we are ought to be always on our guards against vices if we want to remain firm on the path of virtue.

As for the dog, our author observes that it may represent fidelity and utility, as they are for the inhabitants of the country side. It reminds of a quote by Aristotle who made the remark that, according to Pindar, the Immortals gave to bread the name of ‘dog of the great Goddess’.’ 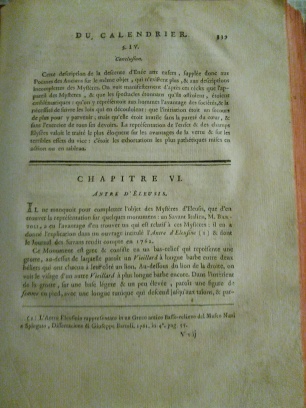 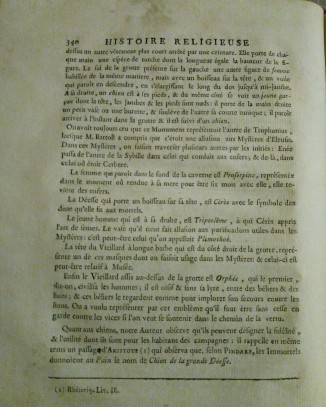 More of the engravings in Bartoli’s work, that in our humble opinion are very close in essence and style to those published in Court de Gebelin’s ‘Monde Primitif’: