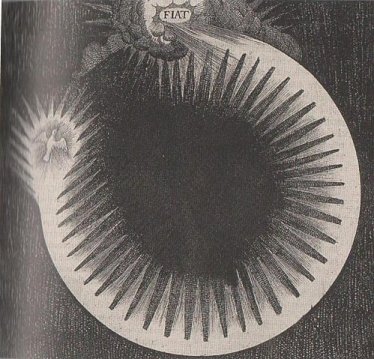 Below takes place an interpretation that brings together the wisdom of Mehmet Akif Ersoy and Thomas the Apostle. A traditional interpretation would rely on a linguistic architecture in which the interpreter uses rather determinate senses of words to reconstruct a unitary representation of the text’s meaning. What follows below is not an interpretation in the traditional sense, because Gnosis is life and fermentation, not an architecture. Concededly the way of Gnosis has a structure, a map, but only the journeymen who have seen beyond the snowy mountains truly know what it is to know. The map is but a call to aspiring journeymen to start searching. A living experience does not leave a blueprint for reconstruction but images for imagination. As Ibn Arabi notes, manifestation does not repeat itself and each image when reimagined resurrects into another life. Thus, instead of fitting the images of the Pearl and the Nightingale into a common architecture, I have imagined Ersoy’s Bübül and Apostle’s Pearl as one continuous flow of images. I expect to continue with the second part soon Insallah. The link to the Hymn of the Pearl, my translation of Bülbül, and the original Turkish version can be found at the end.

Man is forlorn but not abandoned, and this is his truth: Love. The exodus from the heavenly abode is not a fall but a rise: an awakening. The greater gift of God is not that he molded Man in His fashion but that he let Man be Him, and let Him become Man. Whether with or without Man, the Divine Mystery is reserved in Uniqueness. The Unique, the Namelss observes God as both gift-giver and gift-receiver. The becoming of Man is the story of the gift. Both Thomas the Apostle’s Hymn of the Pearl and, its contemporary in heart, Mehmet Akif Ersoy’s Nightingale, Bülbül, tell of the becoming of Man.

The circle begins with the sweetness, the joy of creation: an unending feast, a day without a night. The nightingale, the glimmering expression of eternal life, rejoices over the sacred flow that nourishes:

Off you fly in glee,

Joyous your home, your heart, your creation

The nightingale lays out worlds with the flap of a wing. In tenderness and clemency, unending is the divine bounty. There Man was entrusted with the gift from the divine Treasury:

Large was it, yet was it so light
That all alone I could bear it.

The gift, light as an atom, spanned the entire universe. The gift planted in Man’s heart was the seed that contained all that was and all that will be. Yet the responsibility of what was implanted, man knew not, for he was forgetful:

Indeed, we offered the Trust to the heavens and the earth and the mountains, and they declined to bear it and feared it; but Man undertook to bear it. Indeed, he was unjust and ignorant (Quran 33:72)

Why unjust, why ignorant? Freshly out of the mold, paradigm of perfection, how so? Because justice is regained and wisdom remembered. Thus, Man ought to be tested, kindled into life, into consciousness. The seed needed gardening to flourish and gardening takes sweat and toil. God loved Man, but Man knew not. A veil to manifest His perfection: God forgot Man, and so Man forgot God:

My Glorious Robe they took off me
Which in their love they had wrought me,

And my Purple Mantle also
Which was woven to match with my stature.

His rise was his fall. Man, disrobed of the Robe of Spirit, the purple hue of his consciousness dimmed, was tasked to find light in darkness, the light of the Pearl. This is the exodus. The loud-breathing snake, deep beneath the tenebrous cave, guarded the Pearl. Alas Man knew not, his darkness was the cave, His light the Pearl. In those dark dreams Man remained forlorn:

The shroud of the uncanny darkness

Had fallen over the

No light, no passenger, no sound

All being stood still, forlorn

Not a single whisper dispelled the deep trance

I mistook the dancer for the Divine dance

Man, dispersed into creation, became Many. A dance of mirrors that are brethren in essence, strangers in similitude, a dance that only reflects darkness… Man forgot that divine flap of the wing, the divine Dance of the Nightingale that lays out worlds. The dance without the Nightingale is but a shadow-play. Forlorn, Man, now dispersed into Men, looked to each other for solace to no avail:

I turned my back on the world

Had I found solace in highlands and villages

Man is originally One and not Many, thus from an appearance to another appears no Reality. Men in each other’s company find only slumber. They clothe each other of the clothes of the Many, the nourish each other with nectar of the dispersed. Color, odor, taste distract and disengage Man from his task to find the Pearl:

I forgot that I was a King’s son,
And became a slave to their king.

I forgot all concerning the Pearl
For which my Parents had sent me;

And from the weight of their victuals
I sank down into a deep sleep.

No! Man shall not ‘go gentle into that good night’. He is forlorn but not still. A dry, rusty movement incessantly grinds and compresses in his heart that yearns, laments and mourns. Then suddenly the contracting darkness burst into fire, into a kindling of light. What could contain that divine heart of light?

No holder could hold

No container could contain

It is the toil and sweat of gardening that sprouts the seed, and transforms the seed into a bountiful vine tree. Yet the grape won’t turn into wine without fermentation, without Love. Love ferments the efforts of Man and resurrects Wisdom from eternity. Man begins to recall, to remember and so the forlorn suffers in tears. Suffering, that is Love inverted, is the lovers’ abode. Tears are the water of life and bear no hypocrisy, says a Sage of the East. The lovers have no gift but the tears of suffering for the Friend. In tears Man glimpses Love, the Love that ferments, the Love that resonates:

Up the ladder of the past I climbed

As thousands rose from the dead and

Overflowed off my brain

From the bosom of my darkness surged

A cascade of sobs and tears echoed through

How intense the flaming elegies

How reverberating the moments

Trembled all the trees and stones

As if Uriel blew

the Horn of Armageddon

What’s that contracting darkness but an expansion of light? What are those laments and mourns but hymns of beauty? What is the Hour of Armageddon but a call back to life, to resurrection? The Word bespeaks itself for the faithful lover to hear. The sufferer, alchemically altered, emerges a faithful lover. Once the false ones burn away, true wings of Icarus appear.

As the beacon of love is lit, the nightingale returns as an eagle. The worlds that the nightingale laid out the Eagle watches over and protects. Infused in the Eagle are the Spirit wide in in its wings, and the purple consciousness keen in its gaze. Ha Mim:

Up an arise from thy sleep,
Give ear to the words of Our Letter!

Bethink thyself of the Pearl
For which thou didst journey to Egypt.

It [the letter] flew in the form of the Eagle,
Of all the winged tribes the king-bird;

It flew and alighted beside me,
And turned into speech altogether.

At its voice and the sound of its winging,
I waked and arose from my deep sleep.

As the Word bespeaks itself and as the snake within is awake, the snake without, and all that distracts and disengages Man go to sleep. Love guides remembrance’s flight onwards to perception without duality:

I lulled him to sleep and to slumber,
Chanting o’er him the Name of my Father,

On fabric of silk, in letter of red,
With shining appearance before me,

Encouraging me with its guidance,
With its love it was drawing me onward.

a translation by Emir Abdülkadir İnanç:

I turned my back on the world

Had I found solace in highlands and villages

The water had already grown dark in the city

The shroud of the uncanny darkness

Had fallen over the

No light, no passenger, no sound

All being stood still, forlorn

Not a single whisper dispelled the deep trance

I mistook the dancer for the Divine dance

Up the ladder of the past I climbed

As thousands rose from the dead and

Overflowed off my brain

From the bosom of my darkness surged

A cascade of sobs and tears echoed through

How intense the flaming elegies

How reverberating the moments

Trembled all the trees and stones

As if Uriel blew

the Horn of Armageddon

O nightingale have you

your spouse, your haven

and the beloved spring you used to anticipate

So what for were those laments?

For the troubles you have?

Set upon that emerald throne

Have you founded a celestial reign

Should the shelter of the entire universe fail

Today a valley blessed in green

Off you fly in glee,

Joyous your home, your heart, your creation

Should your High Spirit desire

Under the wave of your wings

No holder could hold

No container could contain

To the emancipated of this world

The course of your Life

is the most desirable end

So why are your forces scattered

Along the days of Time

So why does the ocean of creation entire

Roar in your tiny chest?

No… you have the right to neither lament nor mourn

It’s my right to lament and mourn

Knowing not a glimmer of light

To be without consolation

So my hollowed spring sheds her

A dispossessed fool am I

Child of the East am I

As I let the West crush

The entire legacy of my ancestors

Passing along the well of my imagination

My ideas in ripples

The land of the Commander and the Conqueror

Kneeled down in darkness

Skies shall not resonate anymore

Let that glorious past

But a pile of dust

Only a sunken dome

the tomb of the thunderous

Let the resting place of Orhan

Be mutilated in a sea of

So shall the unity of Spirit crumble

Dispersed into the void

Let millions of my brethren crawl

Under the shadow of destruction

Shall they suffer excruciating pain

Be cut into pieces

So the heathen shall trample upon

You have the right to neither lament nor mourn

It’s my right to lament and mourn 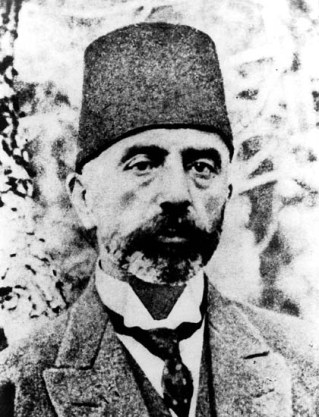 and his rendition of Mehmet Akif Ersoy’s poems,

including ‘Nightingale’ is to be found here 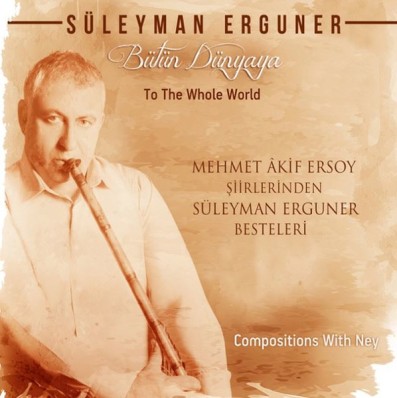 from the album here

the ‘Hymn of the Pearl’