The human physiology expresses in the Cosmos the spiritual principles and laws. It’s study reveals the cause of the life of Man in the Universe.

Each of Man’s organs manifests some laws.

If we examine the positions of the upper limbs we see that they are placed close to the head on each side of the abdomen and on the upper part. They are two in number and each are formed each of three parts: The arm, the forearm and the hand. Each of these parts can move free of the others . Each limb is composed of the arm made by one bone, the forearm by two bones, the hand by a group of five bones. Muscles insure the mobility of the whole.

We notice a symmetry towards a vertical plane that divides the body in two equal parts like the diameter of the universal key. There is a right and a left arm. These two limbs are in symmetry with a horizontal plane that passes by the nostril, center of symmetry of the human body, they are the lower limbs.

When we spread the arms sideways, they form the base of a triangle of which the summit is the head.

When we spread the upper and lower limbs sideways you can wrap them into a square and all the human body can be circumscribed by a circle.

All this demonstrates the symmetry of the human body, expression of a law of form and number.

The upper limbs are placed close to the head because their role is to protect it against attacks and also to serve the cosmic form the closest to the spirit. The head, in fact, is the center where all the organs of the senses are gathered so to tell the spirit about the cosmos and to transmit the idea to the form. It is also into the head that reaches the extremities of the organs that insure the maintaining functions such as nutrition, breathing…The upper limbs prolong, in some way, the center into space so to give a more precise knowledge of the form for the sensation or to model matter after the idea.

They are of a more substantial nature that the brain and must be place under and in order to comprehend a much larger space are pushed aside the vertical symmetrical plane. They are formed of three parts parts so to form a circle; each of the parts is proportioned to the width of the abdomen in such a way that that their length is pretty much equal. Each part has like this the length of the ray of this circle. This circle is described like this: width of the breast, arms, forearms, and the two hands.

The upper limbs express the law of the binary. The left one corresponds to love and the right one to wisdom. The universal current must penetrate through the left limb and exit through the right one. They express also the law of the ternary because they are formed of three parts. Furthermore, the head represents Imagination, the right hand Will and the left hand Might , or Thought, Speech and Affirmation.

The arm is composed of a bone, symbol of unity; the forearm by two bones, symbols of the binary; the hand by five bones which is the number of Man, of Being. Man can also be comprehended by a pentagram. 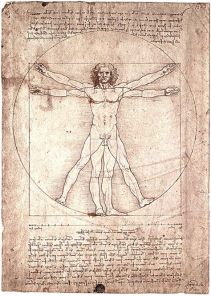 The hand inputs back to Imagination. In fact, it is the hand that allows us to grasp notions of the resistance to the cosmos by forces that Man must overcome so to act upon matter and vice-versa, when the spirit knows this information, so to transform the idea into form so to express essence into substance.

The hand has five fingers because the number five corresponds to Speech: The hand is indeed Speech for matter.

The upper limbs with their ten fingers symbolize the action of Unity (1) upon void (0). Furthermore, each finger is composed of three phalanges which indicates that trinity is in permanent contact with the Cosmos, that it exists both in the Cosmos and in the cycle Eon. This shows also that Man, in order to gain exact information about the Cosmos must establish the ternary in him.

The forearm corresponds to Will. It is the forearm that transmits to the hand the movement produced by the action of the arm which symbolizes Might. This Might manifests, as a matter of fact, with big muscles such as the biceps and the triceps.

If a sensation results from an action of the hand in the cosmos, there is a transmission by the nerves of the forearm up to the brain, then up to the spirit. The spirit seeks in the memory, proceeds by comparison (activity of the binary), arrives at a determination (ternary), confronts its ideas (second activity of the binary), arrives to a new determination (new ternary), compares the two determinations (activity of two binaries), arrives to a third ternary. It is this nonary that is transmitted by the spirit to the brain, to the nerves of the arm, to the forearm, to the hand, and this nonary is fixed by the hand into the cosmos.

So, Man reflects the Pan. Such a perfect expression must then necessarily unite with God.

Translated from the original French of Georges Floc’h,  December 1923.

The Cycle Eon: The Being (in French,’Etre’) aspect of God.