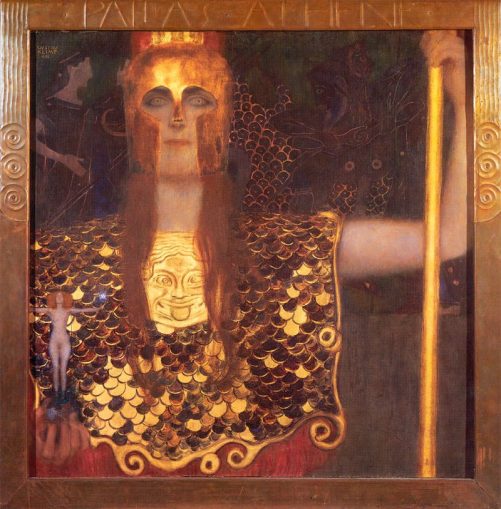 ‘The capacity for control (sophrosyne), the ability to dominate oneself, to govern things, the sharpness of the eye, the sober choice of the means to achieve an end-all these things detach the mind from those powers that came before Athena, gives us the impression of using them without being being used by them. It is an effective illusion, and one that frenquently finds confirmation. The eye becomes cold and clear-sighted towards all it sees, ready to take advantage of any opportunity that presents itself. But for all this 360-degree field of vision, there remains a black speck, a point that the eye cannot see: itself. The eye cannot see the eye. It does not appreciate that it is itself a power, like the powers it claims to dominate. The cold eye looking out on the world modifies that world no less than the fiery breath of the Aegis, which shriveled up a vast expanse of earth from Phrygia to Libya.

‘Pallas Athena and Aegis’ – ancient Roman decorative floor, in the museum Pio Clementino, at the Vatican.

Athena is the power that helps the eye to see itself. So intimate is she with those she protects that she installs her self in their minds and communicates with the very mind of the mind. Which is why Ajax’s father says to his son:’In battle, fight to win, but to win together with a god’. To which Ajax replies: ‘ Father, with a god on his side, even a nobody can win; but i am sure i can achieve glory even without them’. So Athena intervenes and destroy the hero’s mind, like one of those cities she loves to sack. She is ruthless with those who use her tokens-the sharp eye, the quick mind, deftness of hand, the intelligence that snatches victory-only to forget where they came from. It is here that the difference between Odysseus and an ingenuous, insolent hero like Ajax becomes gapingly obvious. For Odysseus, Athena’s presence is that of a secret and incessant dialogue: he finds her in the cry of a heron, the bronzed timbre of a voice, the wings of a swallow perched on a beam, and any number of other manifestations, because, as he says to the goddess on one occasion: ‘You mimic all manner of people.’ So the hero knows he can see her everywhere. He knows he need not always be waiting for the dazzling splendor of epiphany. Athena may be a beggar or an old friend. She is the protecting presence.

The aegis on the Lemnian Athena of Phidias, represented by a cast at the Pushkin Museum.

The relationship between Athena  and the ‘male’, which the goddess loves ‘with all her heart’, is conditioned by an age-old misunderstanding. Athena gives men the weapons they need to escape the oppression of all kinds of sovereigns, and above all of the sky and earth, who had trembled that day they heard the shrill, high-pitched cry with which the goddess emerged from Zeus’s head-and trembled because they recognize that this young girl was their new enemy. But Athena does not give men the weapon they need to escape herself. Whenever man celebrates his autonomy with preposterous claims and fatal deeds, Athena is insulted. Her punishment is never long in coming, and it is extreme. Today, those who do not recognize her are not insolent heroes such as Ajax but the many numerous ‘nobodies’ Ajax despised. It is they who advance, haughty and blind, polluting the earth they tread. While the heirs of Odysseus continue their silent dialogue with Athena’.

From Roberto Calasso’s ‘The Marriage of Cadmus and Harmony’ 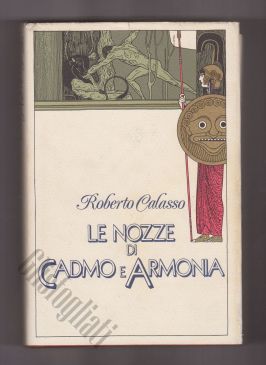